Last summer (talking northern hemispherish here) I decided to join the UIAA youth expedition to climb Kazbek, the sixth highest mountain in the Caucasus mountain range (and thus Europe!) and the third highest mountain in Georgia. I was simultaneously being talked into joining a trip to the Eiger (one of the easier routes, thank you) but decided that was too daunting. Kazbek seemed steep and high and icy enough to be a challenge and a serious mountain, but straight-forward and well-trodden enough to offer some comfort to a relatively new mountaineer. And so, fresh from a few weeks of climbing in Catalonia, hiking in the Pyrenees, and a ten day dabble in El Camino, I took my flight to Tbilisi. 5047 daunting metres loomed.

Kazbek! We wound around the back of the mountain, crossing a few glaciers and meeting up with the Russian route.

We started just above the town of Kazbegi, near a beautiful old monastery. The first two days were spent slogging gear up to the camp at 3800 metres. After that it’s a scary section across moraine covered glacier (think ice, crevasses, tumbling rocks), followed by running the gauntlet under a vertical cliff crumbling to pieces in real time, sending massive chunks of rock fumbling down to our path below. Finally, we crossed the treacherous Gergeti glacier, criss crossed by cavernous crevasses and unreliable snow bridges. 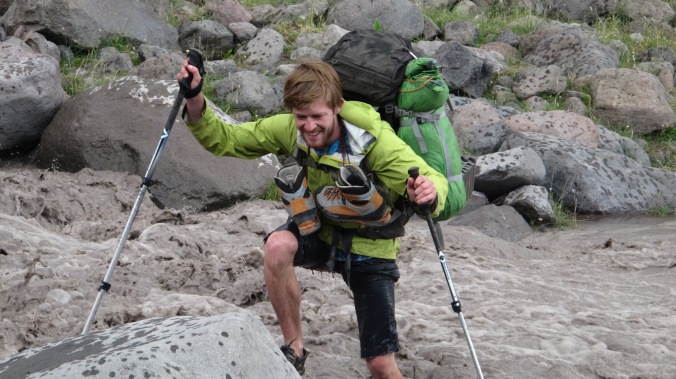 Crossing torrential (and freezing) glacial melt-water. We spent about twenty minutes finding a spot to cross. Others hesitated on either side for up to an hour.

Some baby crevasses at the start of the glacier proper. The ten or twenty metres you can see down belie the three hundred metre total thickness of the glacier.

We spent two nights on the frigid glacier at 4 200 metres, where I was unable to sleep in my otherwise trusty K-Way summer sleeping bag, and not helped by the fact that my tent-mates were snoring happily in their puffy expedition bags. This unsympathetic pair were Javier and Izidor, from Spain and Slovenia. They were both a lot more experienced than me, with experience above 7 000 metres, and summits on many of the major ranges around the world. They were extremely helpful and I learnt so much from spending time with them (hours and hours in the tent, avoiding the sun and then the cold) and being roped in with them while crossing the frightening glacier, and for the summit.

At times cosy and unbearably frigid in our flappy green tent.

For me, the most tiring part of the entire trip was probably digging in and building walls for ours tents on the glacier. My tent-mates decided they’d had enough and left the beginner to do the job. Luckily I was having fun and continued working on our fortification, because about an hour later a huge Georgian search-and-rescue helicopter landed a stone’s throw away and tried its best to send our camp tumbling along the glacier.

The biggest and closest helicopter I’ve ever seen. It created a localised blizzard in and around our tent (the nearest).

From the high camp it was a pretty straightforward snow slope to the summit, with a steep section at the end. We got a beautiful view of the Caucasus range and its highest mountain, Mt Elbrus, where Super Rick stood a few years ago!

Cresting the summit as the clouds closed in.

Happily on top with Javier

On the way up the mountain we made friends with Jana and Janica. They arrived after darkness on one of the first nights and planted their tent serendipitously right next to ours.We spent our evenings hanging half out our tents, laughing and swapping stories. They summited a day before us, and we saw them on the way back down, with huge smiles on their faces. Going back across the glacier, Jana was unroped and stepped on a snow bridge that didn’t hold. She fell into the crevasse and died soon after. News travels hazily on mountaintops, so we didn’t find out the full story until a few days later. It was an incredibly sad reminder of the very real dangers of mountaineering. Nearly twelve months later, our friendship with the pair is my most poignant memory from the trip.